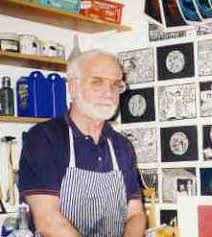 In Issue No.8 of Nurturing Potential in 2003 (http://www.nurturingpotential.net/Issue8/NP8.htm) we devoted our Third Age article to an interview of Yaron Livay who was, at that time, the Art Editor of our magazine.

Following the suspending of Nurturing Potential's publication in 2006 we lost contact with Yaron and have just, with a happy piece of serendipity, located him anew.  He had apparently relocated to his native Israel in order to spend more time with his family, but does still return to London from time to time and we hope, later this year, to be able to report having met up again.

In the meantime, it is very reassuring to learn that he continues to enjoy life, having recovered from a severe illness, and truly qualifies for this place in our magazine, amongst the other members of the cast of characters who are an inspiration to us.  The interview in Issue 8 was entitled Fulfilling a Dream and described how he made the life-changing career move in his fifties from that of chartered accountant to graphic artist.  Now, as he approaches his 70th birthday, the dream has not ended, but the body of work he has maintained and the success he has achieved continue to be inspirational.

In 2003 we were proud to announce that our Art Editor Yaron had succeeded in selling some of his work to five prestigious museums.  His work is currently being exhibited in

Examples of Yaron's work may be seen on his website http://www.yaronlivay.com/ where his very versatile output is described and illustrated in the areas of art books, prints, paintings and public collections.

The other area in which Yaron Livay has been associated with us involved his being the illustrator of the book written by two of our staff and many of its illustrations regularly continue to grace the pages of this magazine. (1)